The crab species most of us are familiar with on Fishers Island is the green crab (Carcinus maenas). On the docks on the Fishers Island Sound side of the island, countless crabs have been hauled from the water with drop lines by youngsters. On the south side of the island these crabs are also present but rarely seen by beachgoers. The evidence of their presence is in the detritus left behind by tidal movement. These crabs are easily identified. 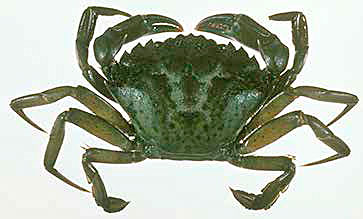 Green crabs generally range up to 4 inches across a carapace that is broader than it is long, though larger individuals have been recorded. Their color is not their most distinctive feature. They range from reddish to dark mottled green or brown. A positive identification can be made by examining the shell. There are five “teeth” on each side of the shell and three rounded lobes between the eyes.

These crabs are an invasive species from Europe that first appeared on the U.S. Atlantic coast in 1817. Though they have been on Fishers Island for generations, they are continuing to spread world-wide. They have earned the dubious distinction of being named one of the 100 worst invasive species in the world. This is due to their voracious appetite for economically important species. They feed on bivalves and other crustaceans. They have a well-documented impact on young oysters, soft-shelled clams, mussels and scallop populations. In Maine a bounty was offered for them though the program was short-lived. Various programs and studies have been done nationally to find a use for them that would make their capture financially attractive, as in Europe where the molting softshelled crabs are a delicacy sold for $40 a pound. On Fishers their primary use is as bait for fishing. They are gathered in traps or collected by turning over rocks in the intertidal zone on South Beach. Presently, however, green crabs are no longer plentiful under the rocks at low tide and, in many areas, there are none present at all. A new invader has come to the island. 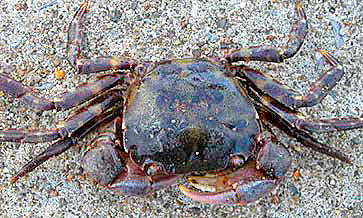 In the past few years, an observant beachcomber would have noticed that the shells and claws left by the tides were no longer those of green crabs. The remains of the smaller crabs that washed up were different. The carapaces were square-shaped with three lateral spines or “teeth.” The legs when present had light and dark bands on them. The colors were mostly an orange-brown, but also maroon and green. A cursory search of the internet or a current seashore handbook would identify the remains as having come from the Asian shore crab (Hemigrapsus sanguineus). These crabs have a maximum carapace width of 2 inches and red-spotted claws with a small bump at the junction.

This new invader was first recorded on the Atlantic coast in 1988 in New Jersey. By 1994, it had reached Long Island Sound. Its first appearance on Fishers Island was not recorded, but since 2013 an examination of the sheltered space under the rocks at South Beach at low tide has revealed a teeming population of the Asian shore crabs. In previous years there were large numbers of green crabs under the rocks and in the attached seaweed, as well as observable populations of young Atlantic rock crabs (Cancer irroratus), lady crabs (Ovalipes ocellatus) and spider crabs (Libinia emarginata). In the sand there were hermit crabs (Pagurus longicarpus) and an abundance of common periwinkles (Littorina littorea). This is no longer the norm. The littoral area exposed at low tide has diminished populations of periwinkles and hermit crabs. Small specimens of the other crabs are generally absent. 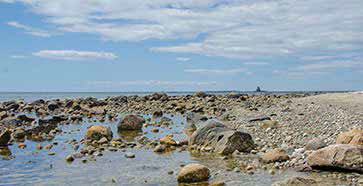 Whether these new invaders will have a like effect on crab and shellfish populations on other parts of the island is unclear. There has been an extensive amount of research in the past decade on the interactions between green crabs and Asian shore crabs in Northeastern U.S. intertidal areas. The ability for the Asian invaders to outcompete the green crabs for both food and sheltering space beneath rocks is well established. The declining populations of the other species present have also been noted in every area studied, though no causation has been definitively demonstrated. It is interesting to note that similar effects have been reported by researchers studying the impact of the recent appearance of invasive green crabs on the U.S. Pacific coast and in Australia.

Both species spawn several times during the warmer months and hatch as free-swimming larvae that mature into juvenile crabs in about a month. This gives them ample time to spread to new areas through a variety of ways. The ballast water of ships is considered the most likely method by which the crabs are introduced into new areas. There is currently no effective way to control the Asian shore crab populations as the parasites that keep them under control in their native areas are not present. So it seems that the crab populations on Fishers Island will be in flux for the next few years at least. Hopefully, the effect of this new invader on our shellfish populations will be minimal.