A struggle for occupancy of the OspreyCam nest east of the driving range broke out on May 7th.

At first three ospreys were involved, then four. According to ornithologist Rob Bierregaard, these “nest in turmoil” (a.k.a. “nit”) scenarios some-times stem from one of the paired mates arriving back late from migration, interrupting a usurper on the nest. Ornithologist Alan Poole posited that with the female not yet incubating, another male (and possibly a third) may have opportunistically intervened. As of May 16, 2019, the aerial battles have ceased, but it remains to be seen whether the nest will be productive this year. 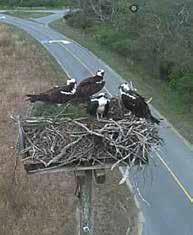