On the Playing Fields of Privilege

In the history of American architecture, the firm of Delano & Aldrich achieved a mythical status for their disciplined aesthetic and the sheer, unrivaled elegance of their many commissions which transformed the American landscape during the early years of the twentieth century. Blessed with advantages that began at birth, superlative training both here and abroad and a wide network of friends and family enjoying similar privileges, William Adams Delano (1874-1960) and Chester Holmes Aldrich (1871-1940) folded their considerable talents into a highly influential partnership that lasted nearly forty years (1903-1940). Building upon their training at the Ecole des Beaux Arts in Paris, and their innate understanding of their patron’s needs in the United States, they set the gold standard for architectural refinement on the stage of American design. Speaking a language of design that synthesized a variety of sources, the architects brilliantly exploited the past and embraced their present to produce some of the most iconic images of the era.

The firm was equally regarded for their high profile clientele, the envy of their profession. Their patrons included the most noteworthy leaders of American society, business, the arts and politics including the Winthrops, Rockefellers, Vanderbilts, Mellons and Whitneys. Members of these families defied the reticence of their upbringing to allow their homes, interiors and gardens to be illustrated in countless publications. Knowing that Delano & Aldrich intimately understood their need for status and expression in an increasingly challenging society, these individuals commissioned their churches, clubs, offices, schools, and most of all, their houses from the firm. Delano & Aldrich provided a form language that serviced their patrons’ architectural needs from cradle to grave.

In the realm of residential architecture, however, the firm earned its greatest acclaim, producing some of the most consummate, publicized and critically praised townhouses and country estates of the era. Despite their international reputation and output, the firm remained parochial with the distribution of their commissions. Unlike many of their most serious competitors, Delano & Aldrich produced only one house in California and none in Florida where so many of their clients held property. Nevertheless, the firm produced over 80 major projects alone on the North Shore of Long Island, which more than any other residential district in the United States, helped to define the components of the American country house era, 1900-1941. 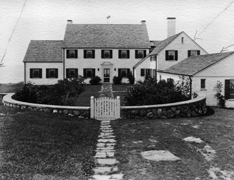 Just miles away, across Long Island Sound is the North Shore of Long Island, home to nearly a hundred commissions given to the firm and yet Fishers Island has only a single commission by Delano & Aldrich, the A.W. Dater house, now Wakeman that is pictured right. This lecture will situate Delano & Aldrich’s residential achievement in context of their peers while focusing on the distinguished nature of their clients, their domestic work and those other commissions which define this unparalleled body of work.

Derek E. Ostergard is a senior expert in the history of European decorative arts and design, dating between the mid-eighteenth century to the middle of the twentieth. He is the former Associate Director and Dean of the Bard Graduate Center for Studies in the Decorative Arts, Design and Culture in NYC which he cofounded in 1991. Prior to that time, he was on the faculty of the Cooper-Hewitt Museum Masters Degree program for many years. He served as a member of Sotheby’s Educational Board and organized several educational trips abroad for the firm. For a decade he was head of the vetting committees for 18th, 19th and 20th-Century European Decorative Arts for the East Side House Settlement House Winter Antique Show in New York and he has served on the vetting committees for the San Francisco Antique Show and the International Fair in New York City.

He has curated many museum exhibitions – all of which have been accompanied by catalogues. Some of the exhibitions he has curated or co-curated have been on view at the Cleveland Museum of Art, the Nelson Atkins Museum, the Dulwich Picture Gallery in London, the Miami Center for the Arts, the Nationalmuseum in Stockholm, the Bard Graduate Center and others. Apart from his current corporate, museum and private advisory work, Mr. Ostergard has been a board member of many non-profit institutions, including UNESCO’s International Council of Museums: Applied Arts and Design Committee, Friends of Historic Italian Houses, Hudson River Heritage, the Scandinavian Design Journal and the Education Committee of the Society of the Four Arts. He has also served on several international juries for the selection of noteworthy contributions to craft and design.

He is currently finishing two manuscripts. One addresses the residential designs and clients of the esteemed American architectural firm, Delano & Aldrich which is entitled “On the Playing Fields of Privilege: the Residential Work of Delano & Aldrich, 1903-1941”. The other, entitled “The Lost Citadel: The Rise and Fall of New York’s Silk Stocking District, 1900-1941” addresses the seismic shift in use along Fifth Avenue and Park Avenue as they were transformed from the city’s preeminent residential districts to the city’s most important commercial section – a battle which involved members of the Astor, the Vanderbilt, the Baker, Rockefeller and Whitney families.