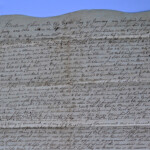 Expell amove & Cast out and the Same to haave again Retain & Repossess as in their first & former Estate, this Indenture or anything herein Contained to the Contrary there of in any wise notwithstanding, & further the Lessor doth reserve the Liberty of one Chamber in the Best house for his own Use only, also ten Acres of Land on the North hill with Liberty of Setting up Fences warehouses Stables & out houses with free Egress & Regress to & from ye premises or any part thereof & the Said John Winthrop his heirs Executor Administrs or assigns Shall have Liberty to Come upon the demis’d Lands & premises to Live there and to make Preparation for Improvement against another year two months before the Expiration of this Lease, and it is further agreed that no Swine is to run at Large on ye said premises, but are to be Kept in suitable Pastures or Inclosures where they may do the Least Dammage and are all to be Ring’d, to prevent their rooting & Spoinling the ground, and that the Said George Mumford Shall at no time break up Any of the Meadow or Mowing Land but what hath been Usual & Accostomary or Such an Equivolent And to lay down what is now or Shall be hereafter broken up, in good order and not to Leave the Same in Indian Hills and ye Said George Mumford his Executrs or Administratrs Shall at no time make over this Lease or any part thereof to any person or persons, without the approbation & free Consent of the Lessor and also all ye Deer, Patridges, peacocks, Quails, rabbits or any other Sort of wild Creatures, with Their Increase are to run at Liberty; & Remain there for the Use of the Lessor, & that the Lessee Shall Have Liberty to Continue on ye premises to Fodder and Look after the Creatures until the first day of May next after the Expiration of this Lease; in Wittness where of the parties to these presents above Written have Interchangeablely Set to their hands and Seals the Day & year first above Written

April the 29th 1746 It is Covenanted and agreed by the Lessor & Lessee that this Lease Shall be & it hereby is Lengthned out one year after the Expiration of the Same & to Stand in full force in Every part thereof Excepting in the Sum pay= =able for the Rent. & the Sum to be paid for Rent this Current year in the Same Mannor as Expresed in the Lease is Two Hundred & Seventy five Pounds in Currant money of New York or Bills of Credit on this Colony or any of the Neighboring Gover =ments that are good & passable Equivolent to the aforsd N.York Currancy. as witness our hands the Day abovesd.
Wittness. George Mumford
Basill Winthrop
Margarette Miller

Many, many thanks to Sarah Malinowski for painstakingly transcribing this entire document.

News from the Museum

Nature Notes from the Museum